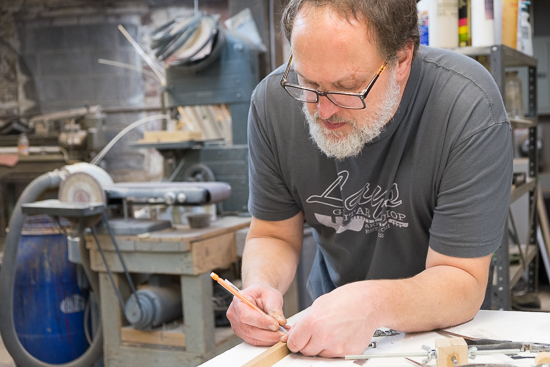 Dan Gable started working at Lay’s in 1992, left to be a working musician and sound engineer, and returned in July of 2017. Dan can handle pretty much any task thrown at him. He does portions of the woodwork in the shop, guitar restorations, prep work, and refinishing. Dan works closely with Joel on a lot of the custom builds. Dan has earned the reputation as the “master tool hider”. If a tool or bridge pins can’t be found, he gets the blame. Dan enjoys driving to and from work, eating and sleeping. During his time away from Lay’s, Dan played with several bands, toured most of the United States, and has been the sound engineer for several Northeast Ohio bands. He even worked with Alan Parsons on a project. Dan would also like to add that he is a hot sauce enthusiast, so if you would like to send in a bottle for him to try out and review, please feel free to do so.